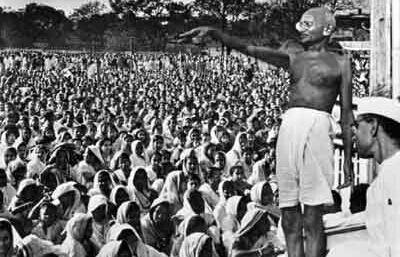 When I was 15, I was made a school prefect. It was quite an honour then because I was the first indian (oh wait, Gurmeet Kaur was there before me – the first dark-skinned indian then) to be chosen into the predominantly Chinese prefectorial board. And the reason they nominated me? Because a year earlier, I had written an essay for the school magazine on Mahatma Gandhi’s influences on my life. (I mean, seriously, could anything influence the life of a 14-year old long enough?)

Anyway, don’t exactly remember now what I wrote in the essay but from the oohs and aahs I got from teachers, I gather I must have done a fine job making a believable story out of nothing – that I was this disciplined, principled young girl.

If you must know, the year before that Richard Attenborough had come out with the movie GANDHI.

My mother used to tell us that whenever KB Sundarambal’s movies played in Malaysian cinemas, ladies in her neighborhood would go around religiously wearing (as briefly as they could) thick layers of vibuthi on their foreheads.

I suppose I was no different.

A Gandhian I was not; and could never be; but tried to be for a brief period of my life. I guess I was, and am too much of a flaw-ridden creature of comfort to become one.

Hope I will some day finish reading THE STORY OF MY EXPERIMENTS WITH TRUTH that I so feverishly bought more than two decades ago (must have watched reruns over the television that year).