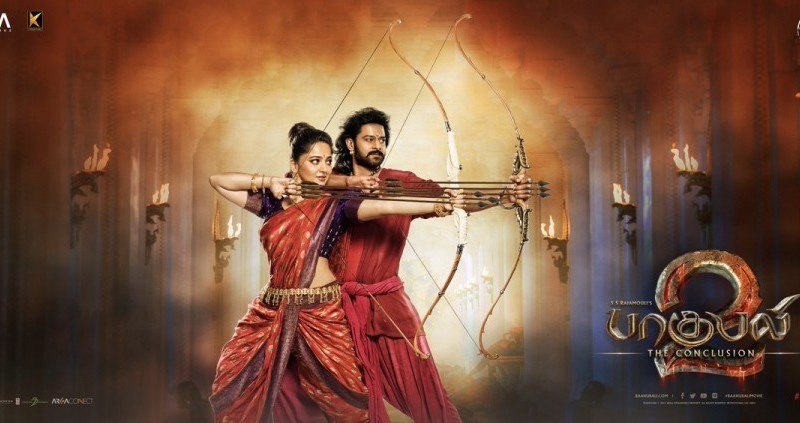 When I saw Baahubali: The Beginning, two years ago I felt rather disappointed that the movie had been left to hang without a conclusion.

Watching the first part of Baahubali 2 on Friday, appeased my mind somewhat with the realisation that it was well worth the wait for the sequel.

Prabhas and Anushka Shetty as the warrior prince Amarendra Baahubali and princess Thevasena transcended the limitations of realistic cinema to effectively create the rasa (mellow) of rathi (love) and viryam (valour), that form the essence of the movie.

Director SS Rajamouli did well to fully display the heroics of Baahubali and Thevaisana exploiting the natural vigour and charisma of both his star actors.

However this cannot be said of Rajamouli’s casting of Rana Daggubati playing the villanous cousin of Baahubali, Bhallala Deva who using treachery, tries to wed Thevasena but instead gets himself crowned king of Mahishmati by his mother, the reigning queen (Ramya Krishna) in place of Bahuballi.

In the first half Bhallala Deva’s character appears subdued but gets overhyped in the second half when the villain faces Baahaubali’s son Mahendra Bahubali, probably following the cinematic success formula of hinging action movies on super villains.

Despite being more than double the age of his young opponent, King Bhallala Deva towers over Mahendra Baahubali played by Prabhas himself making the latter appear a pale shadow of his heroic father.

Similarly the courageous warrior princess, Thevasena contrary to her fiery character appears helpless in the second half allowing herself to be manhandled by Bhallala Deva despite her regained vigour in the company of her long awaited son.

This is obvious in the scene when the villain storms single-handedly riding his menacing war chariot into the midst of Mahendra Baahubali’s phalanx and easily carries off Thevasena to his fort.

Baahubali 2 is technically perfect being the first Indian film to be released in 4K HD format making the computer graphics more wholesome compared to the previous movie. The script, songs and costume however remain contemporary thus curbing the classical/historical feel of the movie.

The general film going public, the world around seems unfazed by these flaws helping the movie to gross RM500.7mil by day six of its worldwide release on April 28. The producers thanks are due to Rajamouli’s ingenuity in investing a big portion of the combined budget of RM168.6mil for Bahubali 1 and 2 on advertising.