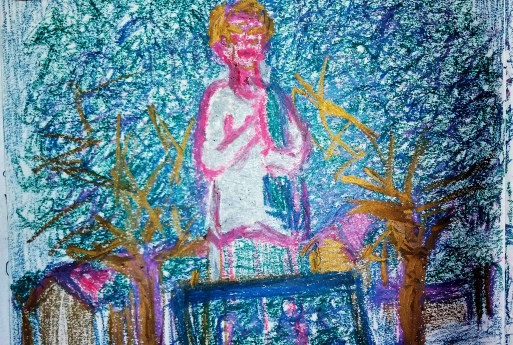 Episode 14. (Scroll down the Literature section to read earlier episodes of this serialised Malaysian story)

He had many ideas to bring his gang to the next level just like how the big time towkays had gone underground with their gangland activities, and in public succinctly donned the garb of corporate figures.

Thiagu’s reverie was broken by soft knocking on the door followed by the echoing of Thivya’s sing song voice which appeared like music to his ears. Your journalist friend …. here to see you, BOSS… what to tell her…

Thana motioned Thiagu to leave. As the latter opened the door Thana saw Thivya standing expectantly there holding a pen in her right hand close to her lips and gingerly moving aside just a tad bit, to let his personal secretary squeeze past her.

The right sleeve of Thiagu’s coat brushed aside the red-yellow scarf dangling loosely down Thivya’s right shoulder as he passed her.

Thana noted Thivya’s blushing cheeks as Thiagu faced her while exiting the door. Feelings of jealousy clouded his already agitated mind and his jaw tightened while the molars gnashed noisily together.

Ask the journalist to come in he told Thivya who held the outside knob of the half open door and was gazing questioningly at him, fiddling with the pen held just below her chin.

She approached Thana who was sitting at his desk crestfallen overwhelmed by anger and anxiety over the new looming threat and pangs of jealousy.

The muscles of his large face were visibly drooped, pulling down the corners of his eyes and lips, presenting a sorry sight of him.

Seema was too preoccupied with her thoughts to note the pitiable state of Thana’s face as she walked forward with quick measured clickety steps.

She deftly balanced herself on the slim, high stilettos of her dainty footwear, wearing a worried expression on her face. Without waiting for Thana to greet her, she plopped herself in the armchair fronting his desk.

The space of about half a metre between the two filled with the burst of a zesty aroma that had Thana momentarily taken aback. He instinctively pulled himself together at this juncture to face his visitor maintaining an air of authority.

Not again she rasped without even looking up at Thana’s face. Won’t they leave you alone.
It’s that damn duo from The People’s Voice who are behind this latest salvo against you. … think they are heroes or something.

Thana was elated that Seema whose bulging fair bosom exposed by the plunging neckline and her bowed posture had unintentionally caught his eye first, was still fully supportive of him.

Yes, Seema. I suspected as much those two would be behind this. I also believe the other guy, Thangappan is it? …. from Clean Merekasia must be linked somehow.

You know these so-called media people are actually agents of certain politicians from the Opposition parties or could well be from within MVP, who want to destroy my political career.

Yes, Thana, I believe so too. To be true, you are a rising star in MVP. Seema was now looking up at Thana with adoring eyes.

The other leaders are dull and a fast ageing lot. Seema’s pleading eyes locked with Thana’s eyes that were glinting with newfound pride and confidence.

Seema continued eulogising Thana. The party’s survival depends on young leaders like you. Of course the deadwood are in denial of this fact and are thinking their time to exit will never come.

After listening awhile. Thana interjected. What is the talk among the other media people Seema. Are they pursuing this story as well. What about Status Quo.

The play of emotions on Seema’s face dampened hearing this trite inquiry from Thana. Her emotions instantly dried up and her countenance became hardened with a professional seriousness.

The crime desk is pursuing this story. That is why I came urgently to warn you.

Talk is that Guru’s elder brother works in a transport company owned by an Opposition MP’s father and is said to have expressed dissatisfaction over the injustice caused his dead brother and his family to co-workers – with the news reaching the boss’ ears.

It is this brother of Guru who lives away from his parents’ home somewhere in the Gembek district at the northern city limit it seems, that the Opposition has got hold of now.

You better do something fast or else this accusation could result in a police inquisition into Guru’s death.

I suggest you get your political boss to help you. I believe he has got the necessary contacts to clear your name.

But pray don’t get your own people involved to solve this matter. I believe it will only worsen the situation.

Especially your personal secretary as he’s under close scrutiny by the media and your political opponents.

In fact, a wise move would be to drop him from the post and appoint a full fledged secretary with good diplomatic skills to win over the confidence and respect of your political allies and foes alike.

All the events and characters portrayed in this serialised novel are fictional and any parallel with real life events or persons is purely conincidental.