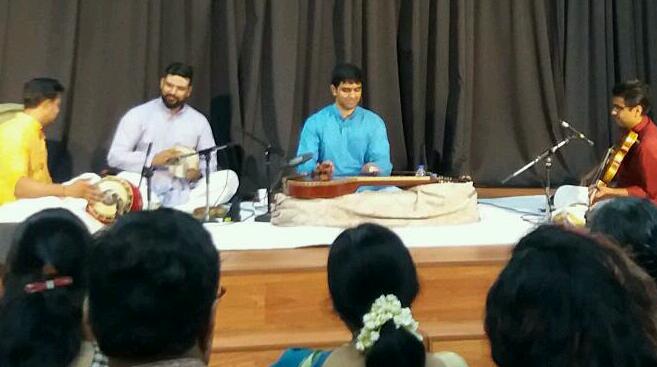 The deep resonating sound of the veena and unbroken melodious tone of the violin, the latter which I am accustomed to since birth daily hearing my late father’s practice sessions, have always had a swooning effect on me.

Performing at the Netaji Subhash Chandra Bose Indian Cultural Centre (ICCR) in Kuala Lumpur on Oct 29, Indian classical music prodigy 26-year-old Vishaal R. Sapuram with his masterful solo rendition, made me fall in love with the music of the ancient chitravina (slide lute).

Which is no wonder as the chitravina sounded to me like the musical marriage of the veena (Saraswathi) and violin.

The age-old chitravina resembles the veena but without frets. It is plucked like the veena but a cylindrical block made of  ebony or bison horn, now replaced by Teflon is glided over the strings along the stem with the left hand.

The plucking sounds of swaras (notes) on the 20 to 21 string instrument is spread out finely with quick sliding movements to render infinite micro tones with great accuracy and impact.

The smooth singing tone of the chitravina  gave the concert organised jointly by the ICCR, the cultural arm of the High Commission of India in Kuala Lumpur and Sangeethalayam, the feel of a vocal (gayaki) style concert.

Vishaal’s rendition of compositions like Muthuswami Dikshitar’s  Maha Ganapathim and Thyagaraja’s Saamaja Vara Gamana were so mesmerising the audience were held sway by the rasa of the timeless melodies.

When the concert ended I had a chance to meet the humble Vishaal who had received vocal music training from age of three and completed his arangetram at age nine. Starting his chitravina performance from the age of 13, he is now an A-Grade artiste for All India Radio.

I could understand the young maestro’s greatness seeing his highly cultured personality and soft spoken manner. The US born Vishaal who has a string of titles including Best Instrumentalist Award from the Music Academy Madras given twice (2015 & 2017), is now a globetrotting concert artiste.

Vishaal who came under Ravikiran’s tutelage at the age of six had began teaching music at age 10. In between he had also obtained academic degrees in economics and Sanskrit together with certificates in Tamil and Business.

It is notable that playing around with swaras in his younger days, he had actually invented a new raga which his guru Ravikiran named Vishweshwarapriya.

One thought on “Mesmerised by Chitravina Concert of Vishaal R. Sapuram”