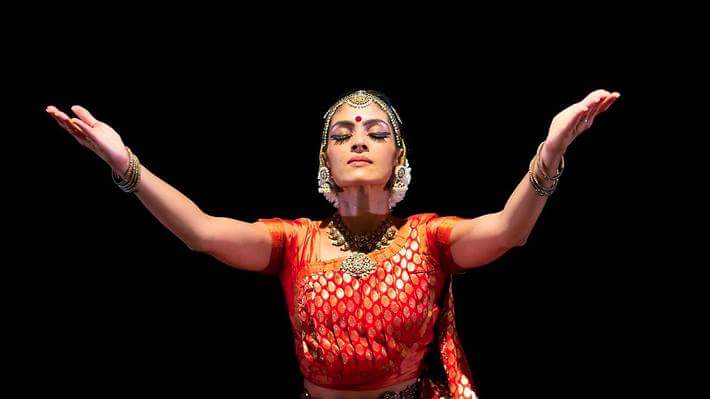 The 2-hour energetic and fast paced solo debut performance, Maargam by world famous Bharata Natyam dancer and actress Rukmini Vijayakumar in Kuala Lumpur on Monday (March 19) was a `’blink of an eye’ moment for me.

Having heard that Rukmini performs classical dance with a display of acrobatic moves, I was delighted to be able to witness this in person seeing her exhibit the robust flexibility of her repertoire, in her recital.

The petite dancer’s repertoire began with an invocatory item beseeching the blessings of Lord Ganesha and Goddess Saraswati through “Swaraguccha”, a string of swaras.

It was wondrous seeing her performing live to “Devi Stuthi” in Raagamalika as compared to the online video clip I had viewed previously. The robust vibration her dancing created in me against the background of the strong voice register of Priyadarshini Govind’s recorded song, was most touching.

Rukmini displayed through her dynamic abhinaya, the various manifestations of Devi, the fuming and enraged warrior goddess Kali; loving mother of the universe, Goddess Parvathi; the supreme authority, Goddess Rajarajeshwari and the merciful nourisher, goddess Annapurani.

The central piece of the repertoire was a Varnam in raagam Charukesi – “Innum En Manam” where the Nayika asks Lord Krishna: ‘Is it fair to pretend that you do not understand my mind yet?’.

Using the captivating sanchari bhava she beautifully depicted the Gopika’s deep longing for Lord Krishna who is indifferent towards her and the rekindling of the vivid memories of his mischievousness and companionship. This leads eventually to the Gopika’s enlightenment in the end when she realises that the Lord resides within her.

Rukmini who was awarded the title “Arsha Kala Bhushanam” by Swami Dayananda Saraswati in 2012, handled the intricate jaathis immaculately and fully utilized the space of the stage throughout the varnam

I very much enjoyed her cute and comical expressions in the filmy styled “Apasara Niranuradha Shambho” themed on the small fights that Shiva and Parvathi have had as a newly married young couple.

It illustrated the “Oodal”, melodramatic anger and sulking that usually occurs in the facet of relationships where Goddess Parvathi being mad at Lord Shiva, enumerates all the petty reasons before finally revealing the real reason for her anger – that being the Lord’s closeness with Goddess Ganga.

This was followed by “Sri Ramachandra”, a bhajan by Saint Tulsi Das that was shrouded with melancholy as it portrayed the emotions of Lord Rama, where his union with his consort, Sita, was constantly tested over time.

Rukmini, through her portrayal of the varying emotions of love and separation in the dance created an emotionally touching experience for the audience.

Her free and easy quality combined with strong foot work in the joyous “Kadanakuthuhala Thillana”, a composition of Balamuralikrishna was a most scintillating conclusion to a most memorable presentation.

Rukmini who has acted with superstars such as Rajinikanth and Amitabh Bachchan in `Kochadaiiyaan’ and `Shamitabh’ was brought to Malaysia by Avant Garde Events – Malaysia with the proceeds of her show going to Shirdi Sai Baba Society of Malaysia.

In an Instagram message accompanying a photograph of a pose struck in her Kuala Lumpur show, Rukmini says: “Sometimes when I dance, the dance washes over me like a wave. It’s like I’m getting pulled into a vast ocean. All I have to do is let go. And then I cease to exist. Only the dance remains and I allow it full control for I am no more……”