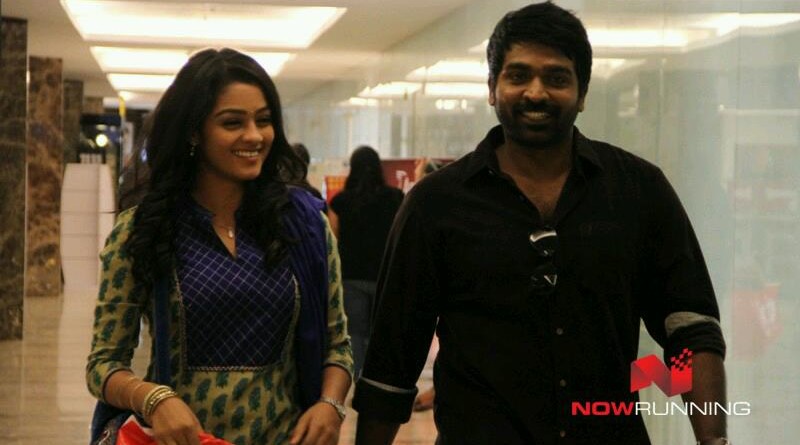 Poor reviews about first time director Ranjit Jeyakodi’s thriller Puriyaatha Puthir left me with a single hope to go watch it – that a Vijay Sethupathi starrer cannot be all that bad.

The movie starts with a young woman’s suicide followed by the movie title and the camera pans a wild party in the next scene.

Vijay Sethupathi playing music director, Kathir makes a stylish entry at the party in a club and connects with his two friends.

The key message of the movie is enunciated from the friends’ banter. One of them, Vinod who works in a recording company is flirting with his boss’ young wife.

The other DJ who works at the club is supportive of Vinod’s affair while the hero shows his disapproval but does not reprimand his friends for their folly.

Subsequently, Kathir meets the heroine a music teacher, Meera played by the demure Gayathrie and he falls for her.

The action starts with Kathir receiving a lewd SMS photo of Meera on his mobile phone. This is followed by a video of Meera removing her clothes in a shopping complex fitting room.

Kathir is caught in a state of desperation trying to locate the sender of the message which he traces to a woman who had recently committed suicide.

And Kathir’s search stops at that as on reaching the dead girl’s house her irate father drives him away. (If only he had probed this lead further he could have solved the mystery quite easily.)

But things turn awry for Kathir as a video of Vinod romancing his boss’ wife is leaked on social media and his angry boss fires him. Vinod subsequently commits suicide.

DJ meanwhile ends up being arrested at his club during a drug raid also following a video leaked to the police.

Gayathrie handles her character well putting on a calm and collected expression throughout.

She maintains her calm composure even in the love scenes with Kathir or when the lewd photos the latter is receiving is revealed to her. This is despite her single frenzied attempt to commit suicide on revelation of the first lewd photo.

The introduction of a stalker who is eventually caught by Kathir after he kidnaps Meera does not put an end to the lewd photos.

The unexpected twist at the end of the movie which many reviewers likened to a movie released earlier this year does not soften the effect of the message, Puriyatha Puthir seeks to relay.

Overall the thriller worked in getting the message of the futility of non-committal goodness and danger posed by smartphone cameras across convincingly.

And the audience were well entertained in the process by the good acting of Vijay Sethupathi and Gayathrie and creative cinematography of Dinesh Krishnan.