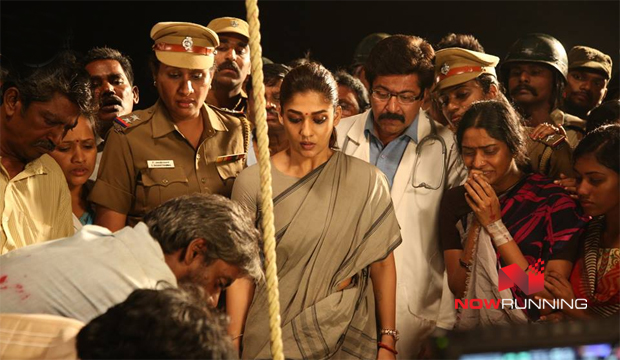 The Nayanthara starrer, Aramm is latest proof that today’s Tamil movie-makers are now very much a part of the Fourth Estate of democracy together with the media.

This is a great change from the time when unscrupulous Tamil Nadu politicians used Tamil cinema to stupefy the masses to keep themselves and their parties in power and in the process undermine the intrinsic culture/ lifestyle of the masses.

Writer turned director Gopi Nainar has proved in his debut movie that he is part of the new group of movie makers who aim to erase the long held movie-fantasy stupor off the minds of the masses.

Gopi’s vision for social equality, democratic justice and effective governance in Aramm is shouldered effectively by top actress Nayanthara who plays the role of a diligent Collector (Indian Administrative Service (IAS) officer in charge of district revenue collection and administration).

The choice of casting a female lead in this movie appears a well heeled move by the director, what with today’s male Kollywood stars mostly vying for box office success playing action, romantic or comedy heroes.

Appearing throughout the movie in just two different sarees, Nayanthara has executed to perfection the non-glamorous role of Madhivadhani IAS, a firm and caring government officer.

The audience couldn’t hold back their tears with the unfolding of the story revolving around Madhivadhani’s struggle to save the four-year-old daughter of odd job workers played convincingly by Ramachandran Durairaj and Sunu Lakshmi, who falls inside an abandoned bore-well.

An uncaring MLA and a minister and inefficient, uncaring government officers are major stumbling blocks to Madhivadhani’s efforts.

Child actors, Ramesh and Vignesh of KaakaMuttai fame are casted as the victim’s brothers.

Prior to the tragedy heart warming scenes of the family going through their tough life in their coastal neighbourhood, is beautifully captured by cameraman, Om Prakash.

Ghibran’s music score including two lovely background songs, the fluid sequence of event portrayals thanks to action choreographer Peter Hein and expert editing by Ruben, ensure there’s not a dull moment for the audience throughout the movie.

Aramm produced by K. Rajesh is a not to be missed movie especially so for  Nayanthara’s fans as the versatile actress is said to have contributed greatly to the making of the movie according to a most grateful Gopi who had earlier been embroiled in a controversy over director AR Murugadoss’ Vijay starrer Kaththi.