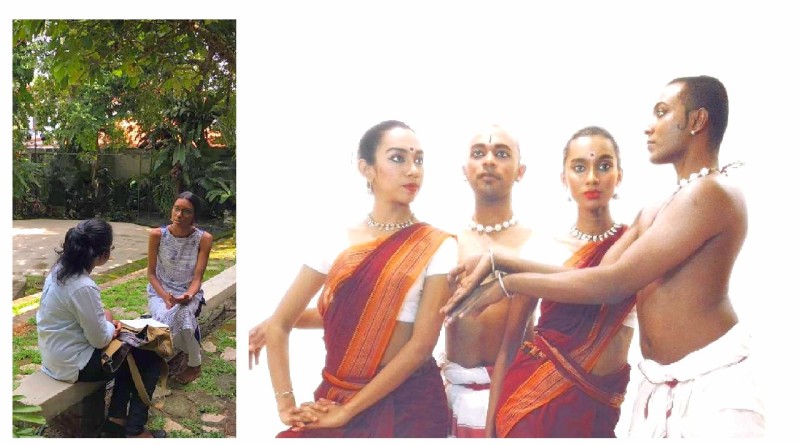 Sutra Dance Theatre at No 12 ,Persiaran Titiwangsa 3 in Kuala Lumpur, the focal point of Odissi presentations in Malaysia has served as the launching pad for many exciting young Odissi dancers in the country.

The theatre’s latest production is an Odissi celebration by four people of different background, coming together to dance to the same beat, aptly called Serentak.

The show will start off with Mangalacharanam, a salutation to Goddess Durga, followed by Sthai, which is pure dance showcasing symbols of instruments. The next part is Aravi Pallavi, which stages the magic of movement, continued by Krishna Tandava and Navarasa.

Krishna Tandava, as the name suggests will give a glimpse of Krishna and Radha, whereas Navarasa will present a dance drama based on Ramayana. The performance concludes with the Moksha item, signifying the liberation of soul and energy towards God.

We had the opportunity to interview one of the dancers of Serentak, who has been living the life of an accomplished dancer and a talented model under the same `rentak’ (simultaneous)

Vanizha is a soaring name in the field of fashion modelling, both in Malaysia and Asia.

The towering height and beautiful pristine features of Vanizha screams model; supermodel even. One might wonder how does this lovely lanky lass transition between modelling and Odissi.

But according to Vanizha, her first love which was Odissi acted as a platform and training, giving her more expression and strength during photoshoots and rampwalks.

Vanizha first started learning Odissi at the age of 15, despite initially venturing into the Bharathanatyam tradition. But then, after her trial class experience which was filled with small kids making her stand out awkwardly, and also based on her Guru, Datuk Ramli Ibrahim’s advice, she chose Odisi. Since then there was no turning back.

At first she had a hard time with Odissi, trying to synchronize with her fellow dancers who were comparatively shorter, and reaching up to her Guru’s expectation of more flexibility and movements to match her height.

But now after years of training, Vanizha succeeded and got to perform in her first major Sutra production, Ganjam, and now Serentak being her second.

Her interest in dance sprouted when she was very young. As a small girl, Vanizha was always mesmerised by the sound of the bell of Bharathanatyam dancers’ anklets, along with their expression and movements.

Just like any other dancer, Vanizha feels nervous, especially since it’s only her second major performance. Yet then, she sees the performance as a means to build her confidence in dance, and that was also the reason why her Guru chose her to perform.

Despite being a full time model, Vanizha gives equal importance to Odissi, which resonates the way she balances out the dates and time allocated based on the weight her role carries.

Although she has created a niche for herself in two different fields, and garnered the admiration of many young indian girls identifying with her dark skin and Indian features, Vanizha remains humble and down to earth.

In the field of modelling, she aspires to be  successful like Tyra Banks and Naomi Campbell. On the contrary, in the field of  dance she sees herself only as a student to her first and current guru, Datuk Ramli Ibrahim, even in the future.

We from theindianraas.com hope that our local indian talent, Vanizha shines in Serentak and also in her future endeavours both as a model and a dancer and continue making us proud.

Photographs by Thinesh Moorthi Kanawathi and courtesy of Sutra Foundation.