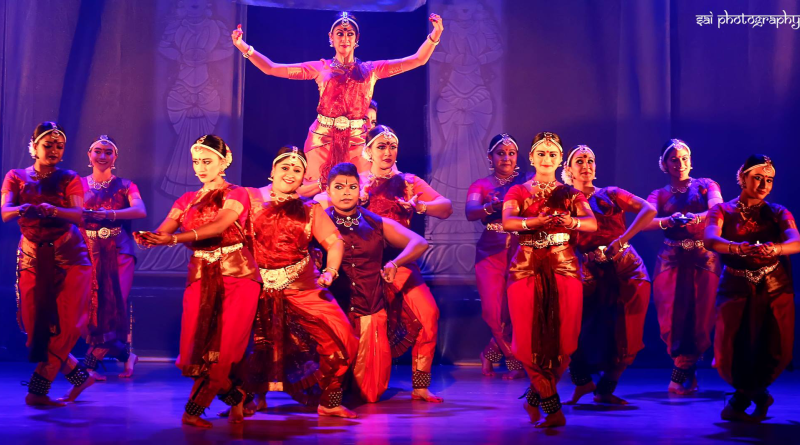 Nritya Kalanjali Dance Academy raised the curtain paying obeisance to Lord Ganesha, the Lord of Beginnings, through Shree Ganeshaya Dheemahi from Shankar Mahadevan’s Vishvavinayaka album which was then followed by Indian Raga’s “Allaripu” and Music from the Heart’s “Kurai Ondrum Illai”, a popular item that depicts gratitude towards Lord Krishna.

This was followed by the vibrance of Goddess Durga slaying the demon Mahisha through “Aigiri Nandini” set in a classical rock number from Agam the Band’s album.

Although classical Bharathanatyam is known to possess a greater degree of emotional depth, the Nritya Kalanjali dancers despite performing to fusion music beautifully utilized the abhinaya aspect of the danceform for instance in depicting the nayika’s grief over Lord Krishna’s memories through “Aasai Mugam” from the album Music I Like by Suchitra Karthik.

The audience were lifted to a higher spirited atmosphere in “Shivaarpanam”, an offering that delineated the attributes of the Lord of Dance, Lord Shiva, in full vigour.

An upbeat “Kalinga Narthanam” concluded the programme in a cheerful manner.

Overall, Rhythm of Dance was a pleasing performance with the choicest selection of Carnatic Fusion music.

Nritya Kalanjali Dance Academy Malaysia was established in 1996 by Guru Srimathi Sudha Thamothiran in Ipoh to promote the Indian classical dance, Bharatanatyam and various folk dance forms of India. Since then, the institution has established branches in Cameron Highlands and Kuala Lumpur.

Having staged many productions over the years in Ipoh and Kuala Lumpur not only by featuring its students and the guru herself but also in collaboration with other dance institutions, Nritya Kalanjali had decided to deviate from the usual pure classical repertoire to a classical fusion dance performance this time around through “Rhythm of Dance”.