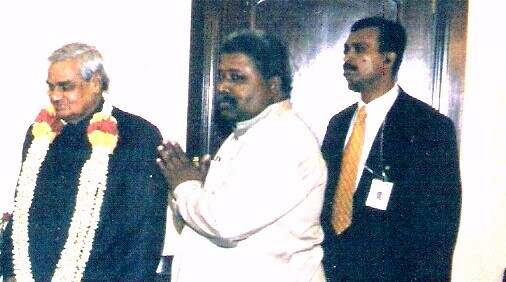 Most of us as HSS’s seniors will surely not forget the experiences of our association with the late former PM of India and Bharat Ratna of the Nation, H.E Shri Atal Bihari Vajpayee.

His thoughtful care for the overseas Indians, their role towards Barath as ambassadors of Barathian culture, tradition, language and Dharma and vice versa Barath’s responsive role in enhancing development of Barathians especially the PIO (People of Indian Origin) Community is but just some of the pioneering efforts of this topmost leadership icon of Barath.

In recognition of this he introduced many strategies to involve the PIO Community and bring them closer to Barath. He ensured that the PIO Community should also have equal experiences of Barathmatha’s intimacy.

Of that the following are the few that need mention –
PIO Card, Pravasi Barathiya Divas, Ministry for Overseas Indian Affairs and the then most pressing need of the hour, establishment of Indian Cultural Centres abroad.

After many undignified historical years, for the 1st time, Barathians world over, could walk tall, with a leader who walked his talks. He was a great role model and very well reknowned leader of modern times.

Right from independence, even as an opposition leader he continuously garnered utmost respect from the then government leaders in power.
He as a leader of the ruling government always eversmilingly accomodated all the opposition leaders and never showed animosity towards anyone.

He was a great visionary, good poet, very compassionate, highly dharmic, a scholar and most of all a man of high dignity. Being a great product of Sangh, a revered son of Barathmatha he daringly proved to the western autocratic world, through Pokran blastings, that Barath was self sustained and self reliant.

Greatest pride for Barath was that he made the then US President to visit Barath without an official call and he was the first Barathian leader who was awarded high respect in the US.

His selfless contributions to Barathmatha and her global children is a vowful penance to be remembered for generations.

Generations to come will hardly believe that such a human with flesh and blood, had walked on the surface of this earth.

By Ramaji
Photo Caption: The author (centre) with Vajpayee.