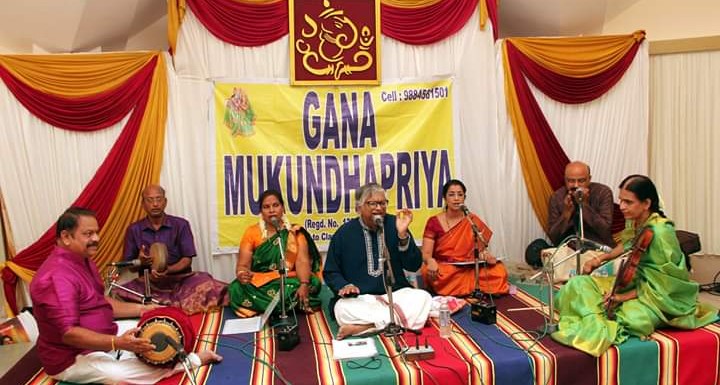 The epitome of Sanatana Dharma is the Guru-shishya Parampara, an ancient educational system that leverages on guru maryaatha (respect/ reverence) and bhakti (devotion/ faith).

This system which enabled the uninterrupted passing down of Bharata Varsha (India)’s rich timeless tradition of classical arts and culture, is still relevant today thanks to the sincerity and dedication of a lineage of genuine gurus and their shishyas.

It is because of this divinely inspired Guru-shishya bond for instance that rare presentation styles and nuances of Bhava (sentiment), Rasa (dominant emotion) in the various arts can still be enjoyed by present day audiences.

It was in this respect that the recent Guru Samarpanam Concert 2018 held to commemorate the 10th death anniversary of violin maestro Padma Shri Kunnakudi Vaidyanathan had also doubled up as a reintroduction of the revered maestro’s innovations in Bhava Sangeetam.

The concert by Vaidyanathan’s principal shishya Prof. Venkateswaran Somasundaram supported by his own shishyas Dr Jayalakshmi Rajkumar and Thevasena Sithambaram was also a reaffirmation of the continuity of the Guru-shishya tradition.

The concert was sponsored by Gana Mukundhapriya Chennai, India.

The audience at the concert held at the Maris Hotel Chennai in India comprising the guests of honour, Vaidyanathan’s widow, Srimathi V. Bageeradhi; son, Kunnakudi Srinivasan and daughter, Srimathi Bhanumathi Ramakrishnan, had the rare opportunity to relish a vocal rendition of the maestro’s popular solo violin concert offerings including some of his own compositions for Tamil cinema.

The heartfelt musical tribute by Prof. Venkateswaran, 63, and his shishyas, all based in Malaysia captured the imagination of the Chennai audience. Music lover, Narayanan Vedantham of Chennai wrote on Facebook:

“the concert was most enjoyable. it was a mini lec dem. Prof Somasundaram Venkateswaran explained the meaning of the song, how the great vidwan Sri Kunnakudi Vaidyanathan handled the nuances hidden in the kriti, வல்லினம்/மெல்லினம் (VALLINAM-MELLINAM: soft and loud tones), some of the விசேஷப் பிரயோகங்கள் (VISHESHA-PRAYOGANGAL: special usage of swaras and melodic patterns to bring out the mood and imagery of the krithi) presented by Kunnakudi; and most importantly Prof. imbibed Kunnakudi Bhani in his approach in Raga Alapana & Kalpanaswarams; great & enthusiastic support by Kalyani Shankar (violin), Vellore A R Srinivasan (Morsing), V Rajasekar (mridangam) & Madipakkam Gopalkrishnan (Kanjira).

Two of his disciples from Malaysia followed their guru meticulously.on the whole it was an evening well spent musically. good ambience too.”

The compositions chosen for the concert by Prof. Venkateswaran who was trained in Sangeetam from a young age by his mother Srimathi Sulochana Somasundaram followed by several illustrious gurus in India including Vaidyanathan, were those that featured regularly in the maestro’s concerts.

The event started with the honouring of Srimathi Bageeradhi by Gana Mukundhapriya Secretary, Prof. A.Gopalakrishnan,

He said when he learnt the nuances of rendering Sarasa Samadhana in the Kunnakudi Bani from Vaidyanathan he always wondered how much his guru must have researched the context of the composition which Thyagaraja had adopted from the Ramayana epic.

“To emphasise for instance the four strategies of dharma: sama (to show persuasion), dhana (giving or compensation), bheda (argument) and danda (force/kill) that Rama employs to deal with the demon Ravana, my guru employed with great effect embellishments such as Vallinam-Mellinam (soft and loud tones), Jaru Swara (liquid notes) and Briga (flash sangathis).

“Playing softly to emphasise sama, raising the tone gradually through dhana and bheda culminating in (danda with the line) hatamu. In (the next word)  jEsitivi his bowing emulates the imagery of the arrow piercing Ravana’s heart and his body jerking before dying and falling off his chariot.”

Prof. Venkateswaran who began his vocal concerts together with his mother in Malaysia presently performs all over the world and is a regular performer in the December Music Season in Bangalore, Chennai, Mysore, Thiruchi and Pondicherry, India.

He is president of the organising committee of the Maris Music Mela, a musical outfit that holds concerts every year during the December Music Season in collaboration with Hotel Maris of Chennai.

Prof. Venkateswaran’s upcoming concerts will be held at Mysore and Bangalore on Dec. 17 and 19 followed by performances in Chennai at Hotel Maris on Dec. 21 and at Sri Sakara Anjaneya Raghavendraswamy Temple on Dec. 28.

One thought on “Guru Samarpanam #video”