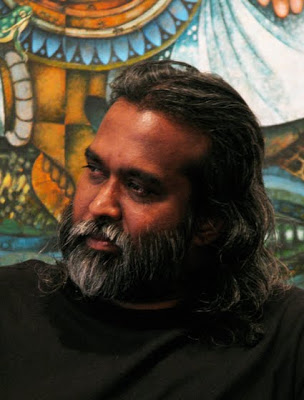 It’s been 11 days since artist Jeganathan Ramachandram left his body anď stepped into the ethereal world.

Jeganathan, 58 is the original mystic artist – hard to comprehend as a person in flesh and blood but wholly transparent after his passing.

Studying the detailed figures, mystical symbols and innovative painting style evident in his prolific works, it’s clear the artist was operating on a transcendental platform.

We can liken Jeganathan’s paintings to the stupendous, richly embellished wall friezes of ancient Hindu temples in India and Southeast Asia, depicting elaborate scenes from the Puranas and medieval historical events.

I can’t fully explain my relationship with this most valued treasure of Malaysian and world art heritage.

The father of budding artist, Dhakshni, 23, is my younger brother by birth, spiritual mentor and scout, fellow artist and alter ego.

We constantly disagree on religious and scientific perspectives but share many visionary insights for the artistic and cultural revolution of the world.

There was a common love of metaphysics we shared and that he actively indulged in his own words: ‘as man of science’, with me acting as an ardent observer.

He excitedly shared every stage of his experimentation in this intangible science, with his somewhat sceptical elder brother.

Jeganathan was always fascinated by the metaphysical aspect of sound, numbers and mantras and employed them for his other passion, psychic healing.

He also resorted to his astral capabilities to source cures for the many who regularly called at his gallery in Bangsar, Kuala Lumpur.

The otherworldly realm especially astral communication truly fascinated him and I truly believe his passing is a means to further explore this realm.

Being body conscious we can’t fathom the transcendental state of our soul and its vehicle, the subtle body (sukshma sareera). The subtle body lives on after death and Jeganathan by dint of his astral potency, I believe lives on for us.

As we performed his final rites and cremated his spent, overworked body, I saw it only as an acknowledgement of my dear brother’s transcendence.

His contributions to the living (physical) world was complete and his legacy (works) will continue to inspire future generations of artists while he briefly explores the afterworld.

It’s been 11 days since artist Jeganathan Ramachandram left his body anď stepped into the ethereal world. Jeganathan, 58 is