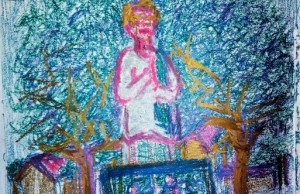 Thiagu knew very little English having spent only a short time in school and that too in a Malay medium national school.

He hardly checked his NoteMe newsfeed feeling abashed, unable to write a proper reply in English.

His main NoteMe activity was sharing memes. Even that was time consuming and this had discouraged him visiting the page. It had been more than a fortnight since he last opened NoteMe.

After Thana’s warning call, Thiagu who was now at his gang’s warehouse at an old industrial estate in Bukit Bulan at the city centre, could think only of Thivya.

Is it true she fancies me? No wonder she was so daring and cheeky with me that day. Especially considering how Thana described her as shy and homely.

He was compelled to get in touch with and find out Thivya’s true feelings in defiance of Thana’s threat.The thought of this affront was most thrilling for Thiagu’s fearless heart, made bolder by fond reminiscence of Thivya’s sweet banter with him.

He pulled out his smartphone to open NoteMe on realising he might get to contact Thivya there.

As he switched on the display his eyes unwittingly fell on the notification panel which he generally ignored thinking it too wordy.

The words Thivya Chan in the bottom 3rd line gave Thiagu a jolt.
Taking a closer look he slowly spelt out the words in the line: ‘You have a friend request from Thivya Chan’.

Opening NoteMe and clicking on the Friends category he smiled. So, my dear, it is true you are interested in me.

Accepting Thivya’s request, Thiagu scrolled through her profile.
There was not much on her profile page, just a single profile picture and that she lived in Mereka city. She had many friends though, all young women from various countries with whom she shared memes and good morning messages.

A notification beep sounded and to Thiagu’s delight, it was a posting on his wall by Thivya.

He hurriedly opened the video post. A green parrot in full flight joins a red parrot perched on a low branch of a mango tree. A burst of colours fills the background to form a heart shaped border.

Smiling brightly Thiagu closed his water filled eyes. He had never felt so warm hearted in his 26 years of life.

Raised as an adopted child from the age of 12 years by an elderly couple with grown-up children, Thiagu had always felt alienated.

The adoption was to be his escape from the harsh handling and severe indoctrination he was subject to in a mission run orphanage.

He was dumped at the orphanage at the age of seven by his uncle after his father was killed in a police ambush at an illegal firearms store. His mother had ran off with her lover when he was just two-years-old.

On realising he had ended up as an unpaid servant in his foster parents’ home, Thiagu made his escape.

Living on the streets for about two years Thiagu soon became self dependent.He was able to defend himself by dint of his good height and robust physique coupled with a fearless disposition. And street sense to peddle petty items and do odd jobs for self sustenance.

This street life ended after he befriended a kindly old hospital attendant. The old widow had taken him to the General Hospital after he injured his right arm while retrieving her chain from a snatch thief at the market where he did odd jobs. He had jumped in front of the thief’s motorcycle to grab the chain from his hand.

Subsequently the woman persuaded Thiagu to move into her unit at the hospital workers quarters where she lived with her teenage son. Although the woman treated Thiagu well her son constantly bullied him. It was at this time Thana came into his life.

Opening his eyes, the long curling eyelashes weighed down with moisture, Thiagu viewed Thivya’s message again. He clicked the `Like’ button choosing the heart emoticon.

His heart was racing and his immediate thought was that he should meet Thivya. At this moment Thiagu’s phone buzzed again.

It was Thivya again via NoteMe chat.
Want to have dinner. 7pm ok. I send location.

A beaming Thiagu could easily read the text and typed “Ok”.

Settling his dealings with the warehouse hands, Thiagu drove away following the GPS navigation for the location map sent by Thivya.

It was only 5pm but Thiagu wanted to arrive early at the restaurant as he wanted to enjoy the pleasure of waiting in anticipation for the arrival of the only person in his life who truly cherished him.

By 6pm he was already at the restaurant, a simple Chinese vegetarian restaurant at the commercial centre of Big Gem housing estate on the outskirts of Mereka City.

The wait was most pleasurable for Thiagu who sat in his car parked opposite the restaurant entrance, in great anticipation and somewhat overwhelmed by his great fortune of having won the heart of a true angel.

His heart beat uncontrollably when a taxi stopped in front of his car and Thivya stepped out looking stunning in a knee length green Kurti and red legging.

Thiagu could not contain his excitement and jumped out of his 4-wheel drive and walked hurriedly towards Thivya who was heading for the restaurant entrance.