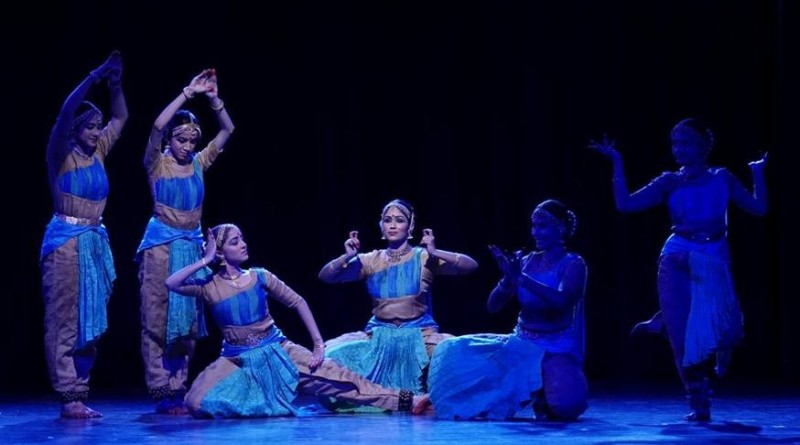 The presentation by the member school of MBDA that marked the finale of the festival opened with the traditional item of Mallari and commenced with a salutation to the sacred river Ganga and illustrations of the various activities that takes place at the banks of the river,

Bhagiratha, a descendent of King Sagara, performed severe penance in order to purify and free the souls of King Sagara’s 60,000 sons, who were burned to ashes by the great sage Kapila for offending him during his meditation. The princes had hurled insults at the sage when they found the stolen Ashwamedha Horse at his ashram.

After centuries of continuous tapasya by Bhagiratha, Ganga finally descended to earth trickling down Lord Shiva’s matted locks to prevent the destruction of Mother Earth due to her turbulent nature and thus consenting to Bhagiratha’s request to provide salvation or moksha for his ancestors’ souls by flowing over their ashes.

In setting a lively atmosphere in the rasa of the flowing waves of river Ganga the dancers delivered the fast paced “Krutha Gangashtakam” by Sri Adi Shankaracharya of which the first, third and sixth stanza of the verses were chosen to be performed.

The audience was then treated to the soulful solo performance by Srimathi Lavanya Sankar herself to the composition “Mama Prana Sama” in raagam Charukesi.

The troupe then went on with another composition of Sri Adi Shankaracharya, the vibrant “Kaala Bhairava Ashtakam”, punctuating the verse “Kasika puradhi nadha Kalabhairavam bhajey” by forming a striking posture of Lord Shiva in his fierce manifestation seen riding on a dog carrying a trident, a drum and the severed fifth head of Brahma as punishment for his arrogance.

In this item Goddess Ganga, the purifier of Kashi and remover of sins is glorified through chants of ‘Har Har Gangey’ to transform the zealous ambience into a radiant one.

Lavanya Sankar’s troupe concluded with the powerful “Ganga Aarathi” set to the chants of Om Jai Gangey Maata, a representation of the magnificent and uplifting ritual that is daily performed at the three holy cities of Haridwar, Rishikesh, and Varanasi in India.

It is also worth noting that Srimathi Lavanya Sankar is the dance choreographer for the official anthem of “Namami Gange”, the mission of the Government of India to clean, rejuvenate, and conserve river Ganga.